I very much enjoyed a recent visit to Diamond Hall Junior Academy -; where I talked to pupils about their worries over litter and fly-tipping in Sunderland. 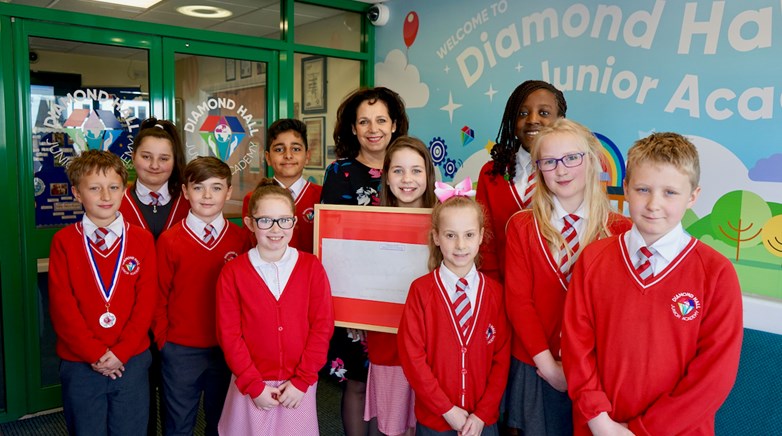 The visit was arranged after I received almost 30 letters from pupils earlier this year. They raised several environmental concerns and I thought it would be a nice idea to pop in and discuss the issues in person.

It really was a most enjoyable visit. The pupils have an admirable respect for their environment and are very knowledgeable about a wide range of environmental issues and challenges. Many thanks for the invitation.

Below is a description of the visit published on the school’s website:

The pupils wrote to the MP with concerns about litter and fly-tipping in their local environment -; in the hope of getting a response back from the top.

Little did they know that Ms Elliott would end up visiting them to discuss the matter in person.

Ms Elliott also met with class 4DG and their teacher, Mr Guthrie, to discuss the hot topics that had drawn her to school.

The MP listened carefully to the children’s worries about litter and took the time to answer a question from every pupil.

She also explained how she became an MP and how proud and special she feels to serve the country and her constituency of Sunderland Central.

After admiring an art and writing installation on British politics, including an incredible replica of Big Ben and the Houses of Parliament built by pupils, Ms Elliot left with a memento of the day, a drawing by Lilly in Year 6.

Kim Bennett, Executive Headteacher at Diamond Hall Junior Academy, said: “It was fantastic to have Julie in school today.

“Our pupils have listened intently to what she had to say, giving them a real insight into political life and the democratic process.

“What is most heartening is that, in line with our Rights Respecting ethos, pupil voice has been listened to, and their concerns over litter have been heard thanks to the positive action they took.”