Light at end of tunnel for neglected station

A North East rail boss is finally to see for himself the faults and problems that have plagued Sunderland’s rundown station for years. 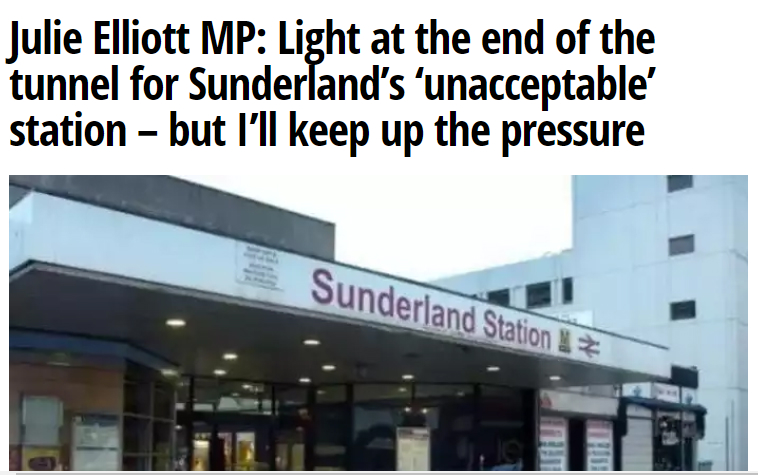 I have spent many months attempting to galvanise Network Rail (NR), which owns the station, into action -; as funding is desperately needed to transform the site.

Just this week the UK Powerhouse report -; which ranks cities on their year-on-year growth -; revealed that Sunderland had the sixth fastest growing economy last quarter.

However, despite our city benefiting from high levels of local investment in industry, road infrastructure and business support in recent months, our railway station remains sadly neglected.

I intend to point out just what is wrong with our station to Mr McIntosh -; and state our case for a new station.

The old building dates to the 1960s and offers a terrible welcome to Sunderland. Sunderland City Council and Nexus have already committed £7.25million towards the costs of demolishing the current site and replacing it with a new concourse, public area and space for shops.

That, however, leaves a funding gap of around £6million and it is time for NR to step up and help. It is possible that work could start as soon as the 2019/20 financial year -; if funding was secured.

Thousands of people are expected to attend the Tall Ships Races in just a few months’ time, yet the current station doesn’t even offer visitors a public toilet. Urgent changes are needed.

In addition, I would like to see the UK’s high-speed rail network extended to Sunderland. This would provide better links for companies wanting to develop overseas trade and help boost our economy.

The economic assets of Sunderland in key sectors like digital can only be fully realised when fellow Northern cities like Leeds are part of the same ecosystem -; genuinely collaborating, not competing.

** This article was originally published in the Sunderland Echo on April 19, 2018.