Today, the Culture, Media and Sport Committee held its first evidence session as part of an inquiry into ‘Homophobia in Sport’, during which the Committee will take into account a range of sports and the different experiences of men and women. 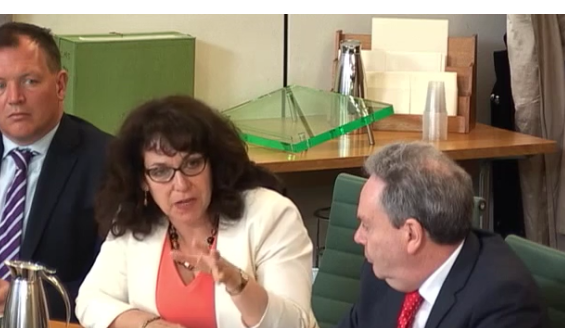 Below is a transcript of Julie’s part in questioning the three witnesses:

Julie Elliott: You have all talked quite extensively about football. Why do you think it is-or do you agree that it is-there seems to be more of an issue within professional football; whereas if you look at rugby it is much less of an issue? Why do you think that is?

Dr Cleland: I wouldn’t necessarily say it is much less of an issue. If you look at the ways in which footballers who have been received, who have come out-they have been well received in the football community. You look at Robbie Rogers when he left Leeds and went to the US; he was applauded on to the field of play when he went and represented LA Galaxy. I think of the case of Gareth Thomas when he came out in 2009 in rugby league-he was playing rugby league at the time. Again-widely supported. There was an issue when he played for his team-I think it was at Castleford, and the Rugby Football League dealt with that; they fined Castleford as a result of the homophobic behaviour of their supporters towards him. It was an isolated case in what he received.

I would say that in elite football we don’t have an out player at the moment. In rugby, in boxing, in cricket, we do have elite sportsmen who have come out, so it is a bit unfair, in a way, to put the emphasis back on to football. I think football does have things that it could do better, but I think that the culture of football has improved, and I think I would certainly try and reflect that, from the research that I have found, using the empirical nature; it is not just necessarily thinking about these things-it is using data to argue this point. I would say that football has improved. I would go back to what I said earlier. Maybe the internal culture of football could advocate sexuality a lot better than it does at present.

Dr McCormack: I think that focus is absolutely, partly, because of that issue of there is no openly gay player currently playing; and I think that makes it fairly easy to attach on to football-to focus there-and it is seen as this evidence of homophobia when, as we have been discussing, it is more complex than that.

Professor Rivers: It is also the case that actually rugby has been far more proactive, so that memoranda of understanding with the International Gay Rugby Association have been signed by World Rugby, USA Rugby, Belgian rugby, Australian rugby-and they have been really out there signing memoranda and actually saying “We are standing up against homophobia, transphobia, biphobia,” and that’s something that football just hasn’t quite done at the moment.

Julie Elliott: Why do you think that is?

Professor Rivers: I still go back to the fact that it is sort of an issue that “We’ll deal with it when we face it”, built in with a culture of celebrity and the amount of money that is actually in football; but I don’t want to say that football is not doing anything. I think when challenged it will demonstrate that various clubs are doing some very good work; I mean we see a lot of clubs wear rainbow laces, for example. We see a lot of clubs further down the league celebrating LGBT history month.

We see a lot of activity; it is just where we need the celebrity element, where we need the Premier League to stand up, they are just not sure what the impact would be for income, marketing, PR and for the players themselves. There are, out of the research that I have conducted, worries about how fans are going to react. They may be unsubstantiated, but there is the worry there, and of course fans are a source of revenue.

Julie Elliott: But is there any evidence in other sports across the world when people come out that it does impact on their marketability? I don’t know whether there is or there isn’t.

Dr Cleland: From a negative perspective, no, not off the top of my head. We have to go back to when Billie Jean King came out in the 1970s-that was negative. Off the top of my head, the people who have come out since-probably since Navratilova in the 1980s-have been widely supported. The opposite might actually happen with these particular sportsmen and sportswomen.

Julie Elliott: So really we are saying that that fear is completely unfounded if you look at the evidence across sport.

Professor Rivers: It is legacy.

Julie Elliott: I actually wanted to ask about women’s sport, because there are a few things I want to pick up on. Do you think that homophobia isn’t really present in women’s sport in the same way that it is in men’s?

Dr Cleland: There is a scholar at the University of Worcester called Rachael Bullingham who is looking at this extensively. There is not a lot of focus in the UK on homophobia in women’s sport because if you look at the coverage and exposure given, most of the focus tends to go on men’s football-men’s sport. I am not saying that that is a good thing. There isn’t a lot of focus, but there are scholars who are working in this area and they find the same sort of thing in women’s sport as in men’s: homophobia is being challenged and the environment for sportswomen is getting better. It is not an area I have touched on myself, but when I read what people are writing in this area the presentation is that the environment is getting better in terms of acceptance of sexuality.

Julie Elliott: But there is now in elite women’s rugby and football. What is the difference? Why is it acceptable there but it doesn’t seem to be acceptable on the men’s side of the sport?

Dr McCormack: There is an issue about whether that is about having openly gay female players, and whether the lack of openly gay male players currently is about something palpable or the legacy and those other things.

Professor Rivers: I think there is probably also an important issue around the fact that women have had to fight very hard to have their participation and excellence in sport recognised-

Professor Rivers: In life as well. Bringing gender and sexuality together has been a mainstay. If you think about feminism, it has been very accepting of lesbian theory and ideas. There has always been a supporting element of women who wish to play sport and lesbians and bisexual women who wish to play sport, which is really important to recognise. The challenge of women getting their sports capacity recognised and their skill acknowledged has meant that women have probably come together more to challenge that gender discrimination-more so than men who, of course, never really had to fight for their rights.

Julie Elliott: Can we go back further to an even younger age? Do you agree that some of the cultural element comes from childhood-school sports and that type of thing-and that that is where this kind of thing starts? Or do you think it is something that people become aware of as they get older?

Professor Rivers: Historically, we have had issues where PE has been identified as a problem area in education. I don’t think it necessarily is now, but I still think that one of the issues is that people remember and reflect on their experience of school sports and then translate that into sports they may wish to do as adults. There is very little evidence out there that suggests PE teachers endorse homophobia. There is some research from Australia saying that there is an issue around PE in Australian high schools, but it is not something that features in British secondary education now.

Julie Elliott: Are you aware of an issue in women’s sport in schools where, rather than people from the LGBT community being bullied and put under pressure for playing sport, the opposite can be the case?

Dr McCormack: There are interesting issues. Some of the changes that are currently happening are driven by young people who aren’t being structured into homophobia. Now that section 28 is no longer banning some of these discussions, young people have positive experiences and interact with LGBT peers in schools. Some of the really positive change that is happening is being driven by young people. Whereas in the past the homophobia that was present in sport was fostered and developed in education, that is much less the case now.

You said LGBT, and it is also important to think about the transphobia component, which does need to be separated out from homophobia. It is a different issue. When we are talking about women’s sport as well, the idea of the sex segregation of sport-the structural divide of men and women-is one of the key ways in which some of the transphobia in sport is manifest.

Dr Cleland: Mark and Ian have researched schools more than I have. I would endorse what they say, seeing as they have done research in this field.

Professor Rivers: Most of my research has historically been on homophobia. The key thing to stress is that I do not believe there is necessarily a huge issue now within school-based sport. I think the issue is more associated with extra-curricular and non-curricular sports, where you have coaches, etc., who are not aware of the issues they have to address. Everyone within teacher education and the training of teachers is aware of the Equality Act and the implications of it. There has been some misinformation about the exclusions that relate to faith schools. That is very clearly demonstrated by a few Ofsted reports, where it has been addressed.

Every qualified teacher, if they have been teaching for the past 10 years, knows about these issues. They are part of teacher education, and they have been for a long time. I teach about the issue to all of our trainees, and I think that is a really important thing. We are sending teachers out who are skilled up on these issues, or at least knowledgeable about them, and there are plenty of resources they can access to support that, such as the Classroom, where there are lessons on how to deal with LGBT issues in PE. I think it is a historical issue, and I would not want to say that teachers and school sports are a problem today.

You can also watch the recording of the evidence session here: http://bit.ly/1U2fegD