Today Julie addressed a busy Market Square in the heart of Sunderland city centre as part of the Fire Brigades Union’s national ‘Ring of Fire’ tour.

The tour aims to highlight the devastating impact the Government’s austerity agenda is having on the fire and rescue service. 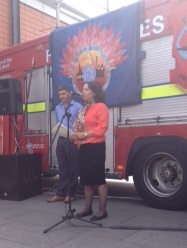 In our region, Tyne and Wear Fire and Rescue Service needs to cut almost £14 million from their budget between 2010 and 2017 and Julie argues these cuts will only have a negative impact on public safety, with Sunderland Central Fire Station set to close in 2017.

“It is my opinion that Sunderland, one of largest cities between Leeds and Edinburgh, should have a city centre fire station.  We have high rise buildings, a student population with many houses of multiple occupation and an industrial port.  The suggestion that we do not need a Fire Station in the city centre is, therefore, crazy.

“Let us not forget that the blame for these damaging proposals lies solely with the Tory-led government.  If they were not pursuing an ideologically led attack on our public services, we would not be in this position and levels of public safety would not be under threat.”

If you would like to help Julie fight to save Sunderland’s city centre fire station, please click here.